In L. J. Savage’s seminal The Foundations of Satistics the reader is invited to tackle the problem of an uncertain future using the concept of ‘lottery tickets’ and the principle of ‘look before you leap.’

Carried to its logical extreme, the ‘Look before you leap’ principle demands that one envisage every conceivable policy for the government of his whole life (at least from now on) in its most minute details, in the light of the vast number of unknown states of the world, and decide here and now on one policy. This is utterly ridiculous … because the task implied in making such a decision is not even remotely resembled by human possibility. It is even utterly beyond our power to plan a picnic or to play a game of chess in accordance with the principle, even when the world of states and the set of available acts to be envisaged are artificially reduced to the narrowest reasonable limits.

Savage was very explicit on the restrictions one had to put on decision analysis based on subjective (‘personal’) probabilities. Outside  ‘small worlds’ it would be “utterly ridiculous” to claim applicability for a theory based on its restricted assumptions.

In The World in the Model Mary Morgan characterizes the modelling tradition of economics as one concerned with “thin men acting in small worlds”‘ and writes:

Strangely perhaps, the most obvious element in the inference gap for models … lies in the validity of any inference between two such different media – forward from the real world to the artificial world of the mathematical model and back again from the model experiment to the real material of the economic world. The model is at most a parallel world. The parallel quality does not seem to bother economists. But materials do matter: it matters that economic models are only representations of things in the economy, not the things themselves.

Now, a salient feature of modern mainstream economics is the idea of science advancing through the use of “successive approximations” whereby ‘small-world’ models become more and more relevant and applicable to the ‘large world’ in which we live . Is this really a feasible methodology? I think not.

Most models in science are representations of something else. Models “stand for” or “depict” specific parts of a “target system” (usually the real world). 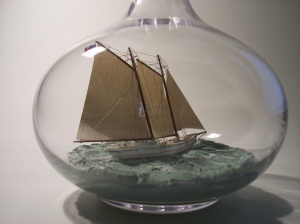 All theories and models have to use sign vehicles to convey some kind of content that may be used for saying something of the target system. But purpose-built assumptions made solely to secure a way of reaching deductively validated results in mathematical models — like “rational expectations” or “representative actors” — are of little value if they cannot be validated outside of the model.

All empirical sciences use simplifying or unrealistic assumptions in their modeling activities. That is not the issue — as long as the assumptions made are not unrealistic in the wrong way or for the wrong reasons.

Theories are difficult to directly confront with reality. Economists therefore build models of their theories. Those models are representations that are directly examined and manipulated to indirectly say something about the target systems.

But models do not only face theory. They also have to look to the world. Being able to model a “credible world,” a world that somehow could be considered real or similar to the real world, is not the same as investigating the real world. Even though all theories are false, since they simplify, they may still possibly serve our pursuit of truth. But then they cannot be unrealistic or false in any way. The falsehood or unrealisticness has to be qualified.

One could of course also ask for robustness, but the “credible world,” even after having tested it for robustness, can still be a far way from reality – and unfortunately often in ways we know are important. Robustness of claims in a model does not per se give a warrant for exporting the claims to real world target systems.

Anyway, robust theorems are exceedingly rare or non-existent in economics. Explanation, understanding and prediction of real world phenomena, relations and mechanisms therefore cannot be grounded (solely) on robustness analysis. Some of the standard assumptions made in neoclassical economic theory – on rationality, information handling and types of uncertainty – are not possible to make more realistic by “de-idealization” or “successive approximations” without altering the theory and its models fundamentally.

If we cannot show that the mechanisms or causes we isolate and handle in our models are stable, in the sense that what when we export them from are models to our target systems they do not change from one situation to another, then they only hold under ceteris paribus conditions and a fortiori are of limited value for our understanding, explanation and prediction of our real world target system.

The obvious ontological shortcoming of a basically epistemic – rather than ontological – approach such as “successive approximations” is that “similarity” or “resemblance” tout court do not guarantee that the correspondence between model and target is interesting, relevant, revealing or somehow adequate in terms of mechanisms, causal powers, capacities or tendencies. No matter how many convoluted refinements of concepts made in the model, if the “successive approximations” do not result in models similar to reality in the appropriate respects (such as structure, isomorphism etc), the surrogate system becomes a substitute system that does not bridge to the world but rather misses its target.

So, I have to conclude that constructing “minimal economic models” — or using microfounded macroeconomic models as “stylized facts” or “stylized pictures” somehow “successively approximating” macroeconomic reality — is a rather unimpressive attempt at legitimizing using ‘small-world’ models and fictitious idealizations for reasons more to do with mathematical tractability than with a genuine interest of understanding and explaining features of real economies.

Many of the ‘small-world’ model assumptions standardly made by mainstream economics are restrictive rather than harmless and could a fortiori anyway not in any sensible meaning be considered approximations at all.